Oh, Las Cienegas! That place was uh-maaaaaay-zing! However, my two weeks here were up and I had to carry on. (I believe you can scroll your mouse over the photos for captions)

Cienegas Cow stare-down. Immediately after taking this I decided to beat feet before I got stampeded upon.

The Girls dug it here!

Nice sunset with our owl friend.

Destination? Organ Pipe National Monument. It came highly recommended by some of my fellow Rv’ing nomads, some of which I was going to meet there at Organ Pipe- Shannon and David of 2wanderaway.

My route took me up through Tucson where my mom happened to be getting her new RV serviced ONCE AGAIN. Flashback a few months earlier in Montana… mom sold her 29′ Safari Trek which was about 18 years old and traded it in for a 36′ Winnebago which was only 10 years old. 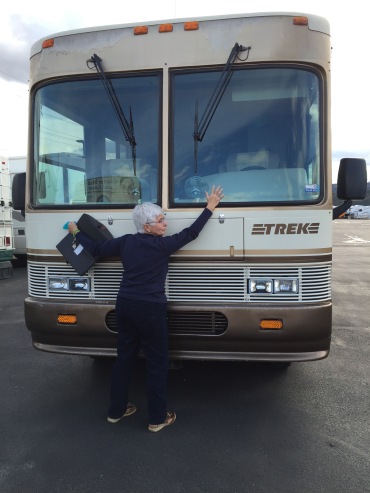 Mom saying by to her beloved Trek. It really was traumatic for her- the longest she’s lived in any one dwelling in her life.

The age of this new Winnie beast worried me a little bit, but we figured that 10 is better than 18 and she would not have to deal with the constant issues which were becoming almost a daily problem with the Trek.

Oh how wrong we were.

From bays that weren’t heating as they should to getting screwed out of $1,400 by a con man who worked at an RV dealer in Kalispell Montana, to water pump problems, to power issues, battery issues and more, poor mom just about couldn’t take it any more. I would cringe when I would call her because every time I did, there was another crisis with her Rv!

After multiple repairs in Montana, mom finally hit the road and made it to Arizona. More problems surfaced and so she took it to Mesa Rv. She was told her coach battery was shot and something about the fact that all of her batteries did not match, so they replaced all of her batteries. (I believe the dealer in Montana claimed that all her batteries were new.) Not long after that repair, the right front leveler wouldn’t come down as it should and the coach had started backfiring. (Sigh)

After hearing great reviews about Freedom Rv and needing a service center that could work on engines, she took her Rv to Freedom RV in Tucson. (She was pulling hair out at this point. However, the bald patches have since grown back in. )

To my (and especially HER) surprise and delight, they basically took her under their wing, fixed the problems and even gave her benefits which I cannot elaborate about here because it was out of the ordinary as far as the benefits and services they normally offer are concerned. (No, no, nothing like that! Get yer mind out of the gutter.)

This highlighted how much they cared for her and truly wanted to help her. It showed empathy for the distress of her ongoing problems she had encountered.

After some diagnostics, they initially believed it to be a big issue- something that would be very expensive to fix, but it ended up being (get ready for my very technical explanation) something about a ‘bad coil pack’ which was a much cheaper, easier fix. Therefore the pocketbook didn’t take yet another hard hit, and thankfully at that.

While relieved about the repairs not being extremely costly, the stress of constant repairs had taken its toll on mom. The morning of the day I arrived, she broke down in tears –in public- at the facility (The girls of my family do NOT do public crying)  when she was attempting to attach her tire monitors onto the stems and could not get one of them on due to a bent shaft or what not. It was just one more thing, and she looooost it.

Without her asking, the friendly staff saw her distress and came in and helped her to get it corrected without charging her for their time! Now that’s service.

Mom with Chapa. He even invited us to the big rodeo next year if we are in town. He’s a ‘big guy’ in the rodeo and can get us in free! 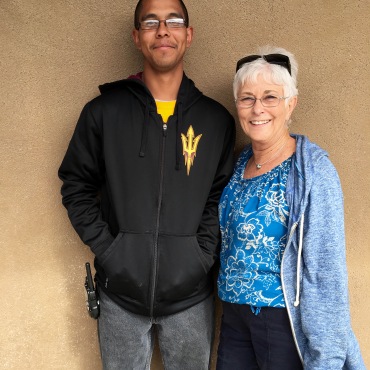 Mom is busy doing taxes and she couldn’t find the name of this young man, but she has it written down SOMEWHERE!

The day she was leaving I came along to get my tanks dumped and to fill my water at RV Central. (Right next door to Freedom Rv.) Mom filled me in on all of this and it sounded like they were a part of her family. They took mom in and really ‘for real’ cared about her and LISTENED to her and HELPED her when she really needed it the most. This is something she always complains about- that having ‘white hair’ tends to render you invisible or unimportant. I saw the way they talked to her and tended to her and it was really nice to see as they were genuine with her.

I wholeheartedly thanked them for this. You could tell that each employee there really cared about his job and the quality of service that they provided. Mom said, and I quote “I found a goldmine! Freedom Rv is just the best!” I know, it sounds like a commercial. I am simply quoting what she texted to me.

I even benefitted from the business. While dumping my tanks, I noticed that I had an issue with my weight distribution bars and so I asked them if they could possibly get me in on the fly. (I did not have an appointment) They fixed it immediately, right there and then and DID NOT CHARGE ME! Holy moly that was so AMAZING! I offered to pay for it and the receptionist would not have it. How is THAT for service?

Mom and I have both experienced a lot of ineptitude when it comes to RV service centers. I am not sure what is behind the lack of skill or caring about the job that many tend to do, but this is one place that mom and I would definitely recommend over and over again. Therefore, if you are in the Tucson area and you need any sort of Rv service, yep- take it to  Freedom Rv!